This is the Yamaha Moko Powa D10, sometimes called the Powa D10. It’s based on the chassis and engine of the Yamaha FZ750 and it’s been given a bespoke aerodynamic kit developed by Hans Walther and offered in a kit of eight pieces to prospective buyers.

It’s believed that just 10 were made, 6 of these are known to have survived, making it one of the rarer motorcycles of its type from the era. Thanks to the aerodynamic fairing and the 100+ bhp from the FZ750 engine the Moko Powa D10 was said to be capable of 200 mph.

Despite its revolutionary looks, the Yamaha Moko Powa D10 is actually a relatively standard Yamaha FZ750 under its skin. 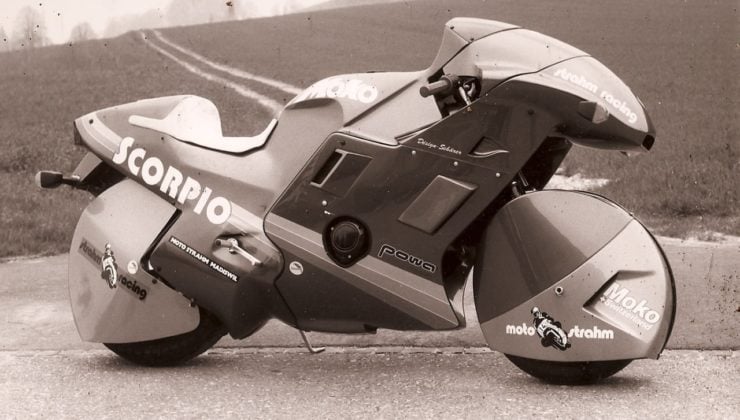 This is the Honda Powa D10 it was also designed by Hans Walther, and the familial similarity to the Yamaha Moko Powa D10 is clearly evident. If you have more information on this motorcycle please get in touch via our “Contact Us” page linked in the footer.

The futuristic aerodynamic bodywork was developed by motorcycle designer Hans Walther of Powa Design in Switzerland. Walther also designed at least one other motorcycle, the similarly futuristic Honda Powa D10, however even less information is available about this than the Yamaha.

With the design work completed the testing and fabrication was taken care of by well-established specialist motorcycle engineering company Moko.

The name Moko is a portmanteau of Motorrad – Konstruktion, and they have developed a a broad range of unusual high-performance motorcycles over the years. Impressively, the company is still in business today.

The bodykit for the Yamaha Moko Powa D10 is made up of eight pieces, the original bodywork on the FZ750 would be removed and replaced with the new kit. The design was said to have been influenced by the early dustbin fairings used on some grand prix motorcycles beginning in the 1950s.

With the rider tucked in behind the windshield the Moko Powa D10 was said to be capable of a (claimed) 340 km/h or more, which works out to almost exactly 200 mph. Finding solid information about whether this top speed has ever actually been attained is another matter altogether. 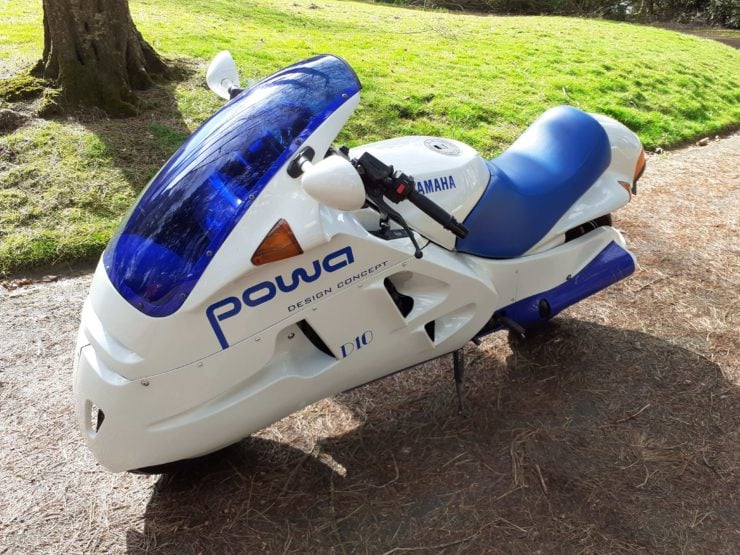 The design of the Yamaha Moko Powa D10 is somewhat reminiscent of the legendary bike from the animated Japanese film Akira.

Of the original 10 motorcycles that were built just 6 are known to have survived to the modern day, and the example you see here is the only one we’ve ever seen come up for public sale.

The Yamaha FZ750 was developed by the Japanese motorcycle manufacturer as a successor to the successful two stroke Yamaha TZ750 superbike. By the mid-1980s it was clear that the writing was on the wall for two-stroke motorcycles, given increasingly stringent emissions regulations, though replacing the TZ750 was to be no mean feat.

The key criteria for the new FZ750 was that it should be no less powerful than its forebear, with roughly the same displacement, using a four-stroke design.

Yamaha engineers developed a new inline-four cylinder engine to be fitted to the frame transversely, a common layout ever since the introduction of the Honda CB750 back in 1969.

The new FZ750 engine has an all-aluminum design with double overhead cams, and unusually, it has five radially positioned valves per cylinder – three intake and two exhaust. 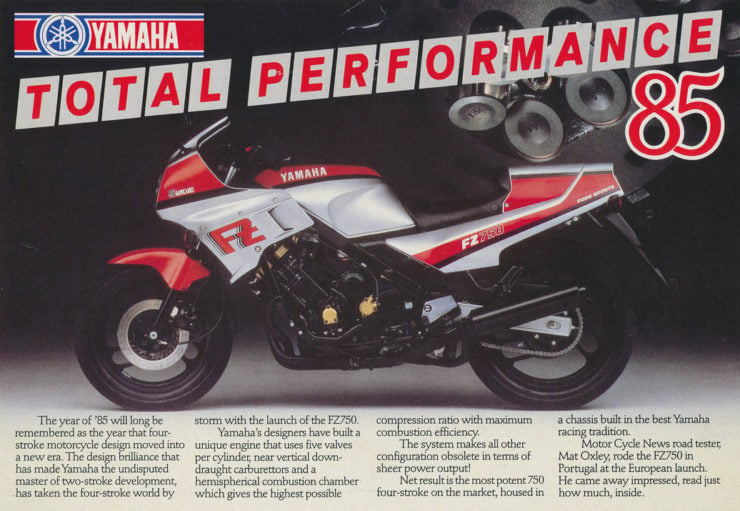 This is a period advertisement of the Yamaha FZ750 from 1985, showing what the bike looked like before it was turned into the Moko Powa D10. Image courtesy of Yamaha.

The motorcycle you see here is one of the six known survivors of the original, very limited, Yamaha Moko Powa D10 production run.

It’s believed to have had just three owners from new, it was built in 1985 but it wasn’t road registered until the year 2000.

The bike is currently being offered in a pubic online auction by Car & Classic, out of Kergrist-Moëlou in western France.

If you’d like to read more about it or register to bid you can visit the listing here. 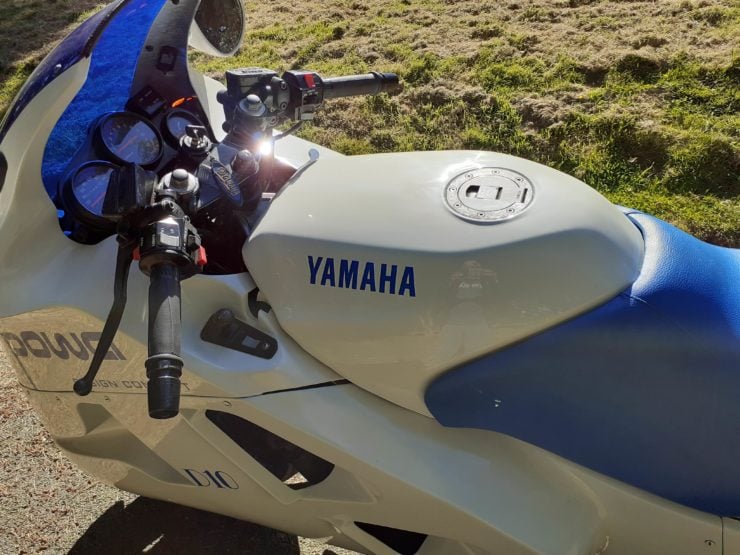 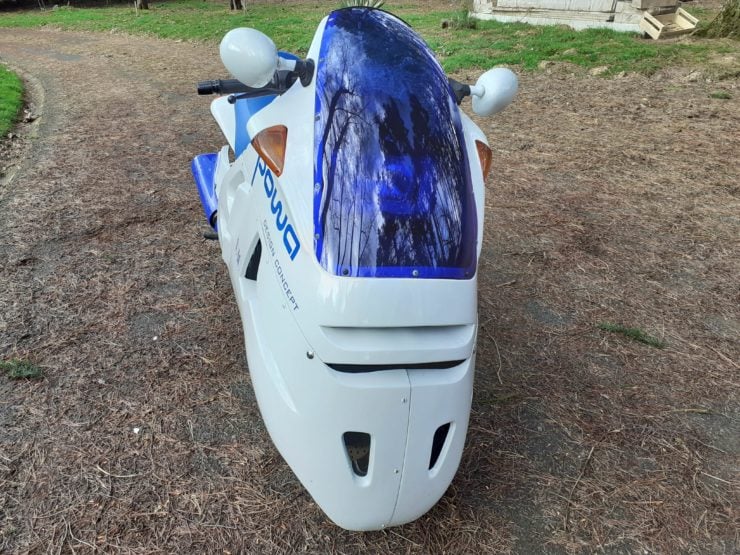 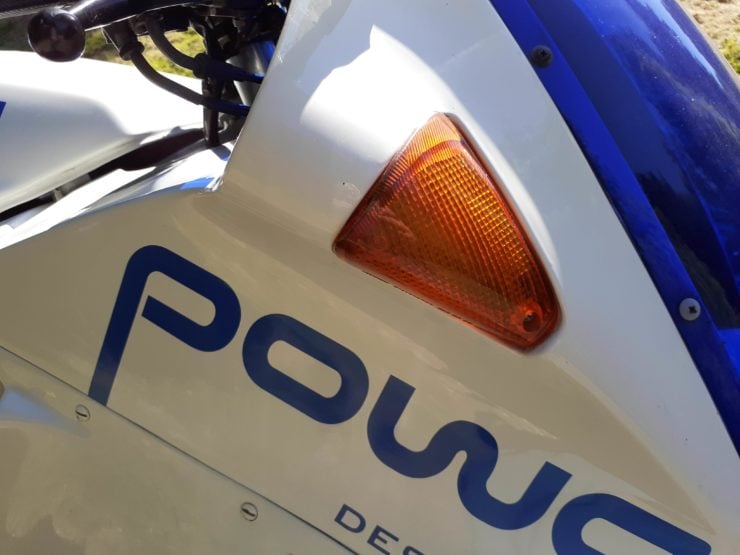 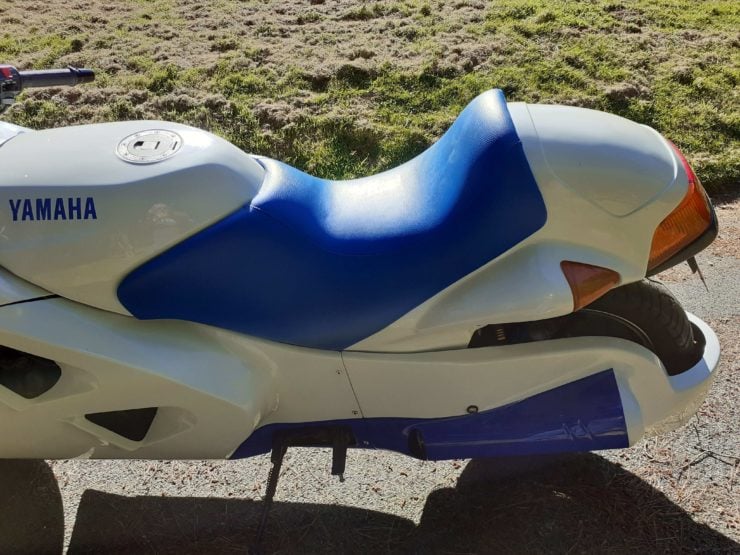 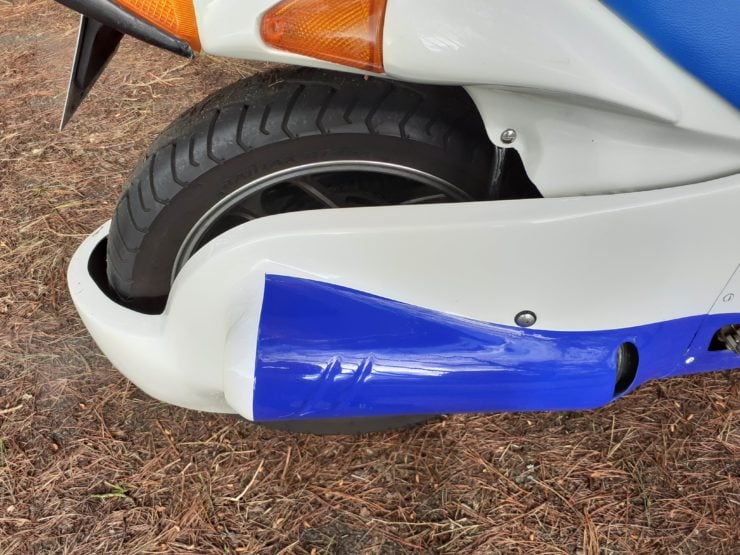 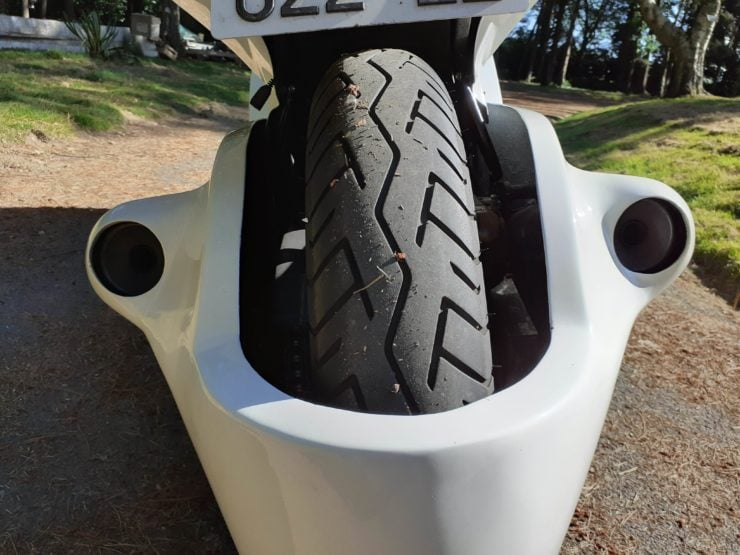 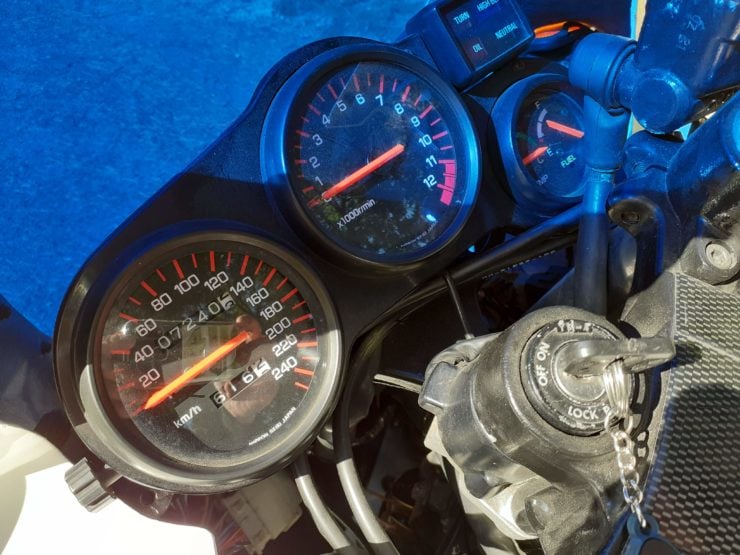 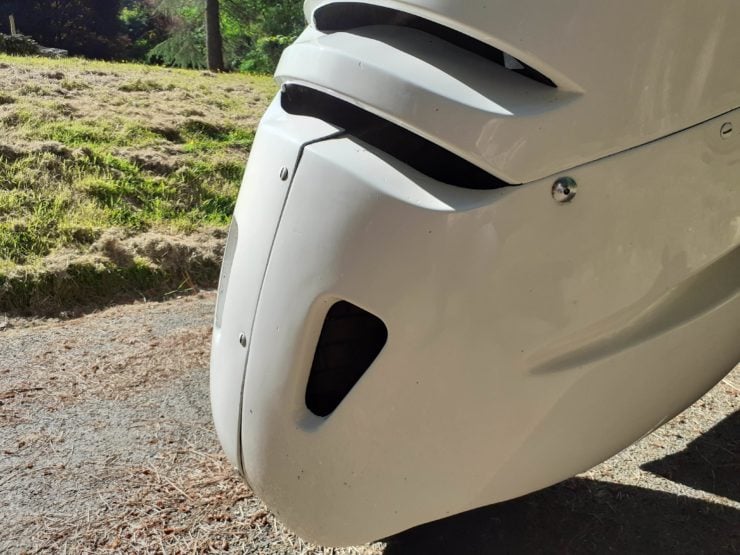 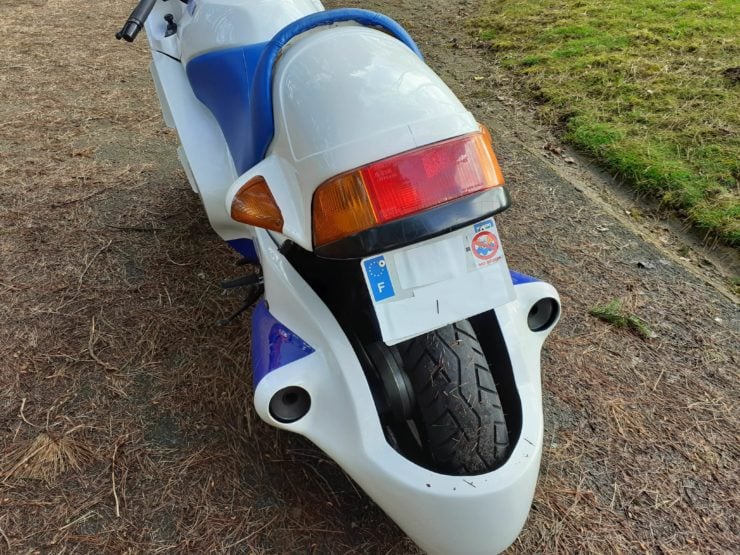 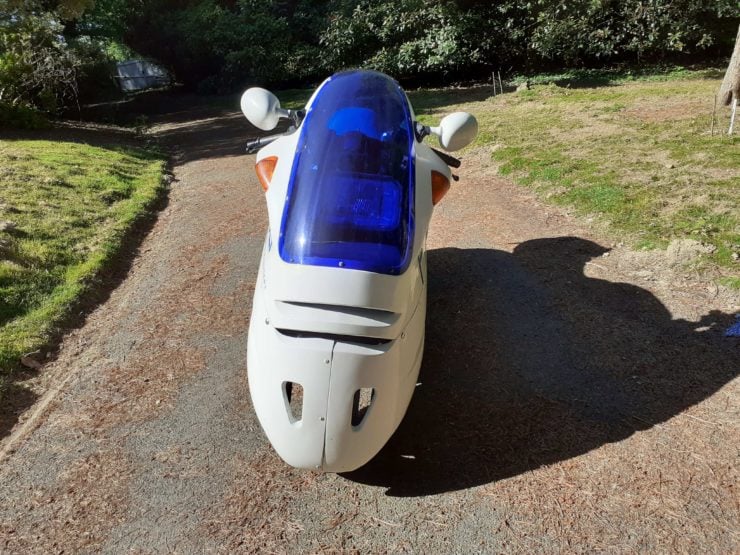 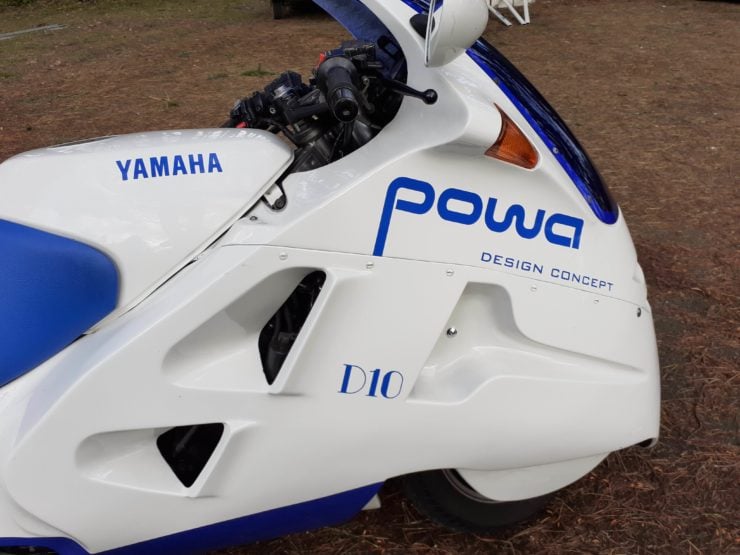 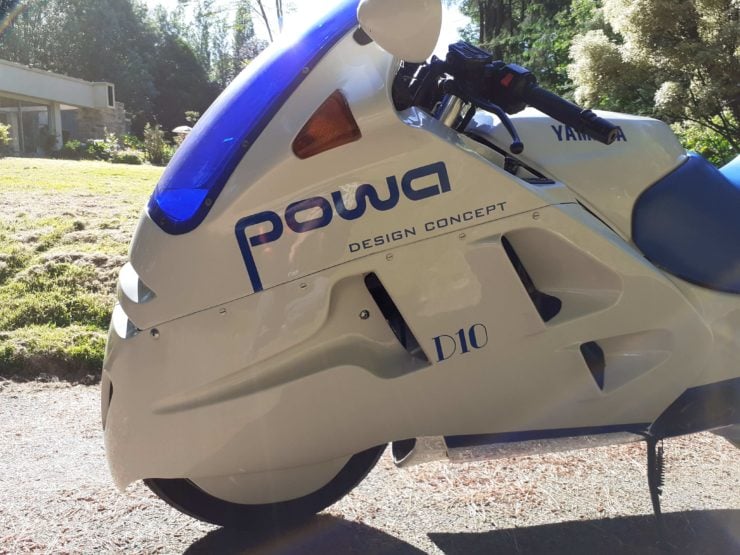 Images courtesy of Car and Classic